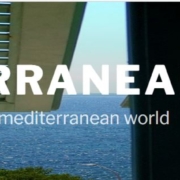 leggi online
by Anders Dahlgren
Maria Grazia Calandrone is a poet, playwright, journalist, performer and writer based in Rome. She presents cultural programs on RAI Radio 3 (most recent program: “Poesia in technicolor”), contributes literary criticism to Poesia, il manifesto, Corriere della Sera and 7, leads poetry workshops in schools, prisons, and mental health units, volunteers with the Piccoli Maestri children’s reading center, directs the interview series I volontari and a videoreportage about Sarajevo for Corriere TV. Her books include: Pietra di paragone (Tracce, 1998 – Nuove Scrittrici Award), La scimmia randagia (Crocetti, 2003 – Pasolini Award), Come per mezzo di una briglia ardente (Atelier, 2005) La macchina responsabile (Crocetti, 2007), Sulla bocca di tutti (Crocetti, 2010 – Napoli, Sassari and Prata Awards), Atto di vita nascente (LietoColle, 2010), La vita chiara (transeuropa, 2011), Serie fossile (Crocetti, 2015 – Marazza and Tassoni Awards), Gli Scomparsi – storie da “Chi l’ha visto?” (Gialla Oro pordenonelegge, 2016 – Dessì Award), Il bene morale (Crocetti, 2017 – Europa and Trivio Award), Giardino della gioia (Mondadori 2019 and 2020), the translations Fossils (SurVision, Ireland 2018), Sèrie Fòssil (Edicions Aïllades, Ibiza 2019 – traduzione di Nora Albert) and the arabic anthology Questo corpo, questa luce (Almutawassit Books, Damasco 2020), the pseudo-novel L’infinito mélo, with an audio CD of her readings (Sossella Editions, 2011), Per voce sola, a collection of dramatic monologues, drawings and photos, with a CD by Sonia Bergamasco and EsTrio (ChiPiùNeArt, 2016) and Un altro mondo, lo stesso mondo. Una riscrittura del Fanciullino di Giovanni Pascoli (Aragno 2019). She has also written short stories, present in numerous anthologies, and edited and introduced Nella Nobili’s poetry volume, Ho camminato nel mondo con l’anima aperta (Solferino 2018) and Dino Campana. Preferisco il rumore del mare (Ponte alle Grazie 2019). In 2017 she appeared in Donatella Baglivo’s documentary ll futuro in una poesia and in Israeli filmmaker Omri Lior’s Poems With a View project. Her poetry has been translated into over twenty languages.
da/from La macchina responsabile, Crocetti, 2007
traduzione di Johanna Bishop
THE EMPTY ISLAND
I – the sea
The Tyrrhenian is a cage of salt
an ailing corpse
to be mimicked
in the impassive sleep of an animal.
The contortion of the rocks
broken loins of enormous phenomena passing
along the coastal ribs
animals laid out for calm weather.
The saints stood like cormorants
—their beaks bound
to the articulations of the sea
they serve as bellwethers for caravans.
The watershed of summer savory
the recumbent aviary of the maestral—with their tufts
of wings withered one by one, verging on a forest of saline derivation.
The Aeolian peace of the cliffs, vast
battle horns
above the clay flats still as sanctuaries
and mines of salt silver
merchant ships in the bunker of tillage.
II – the earth
A vast winding sheet over the bass drum of the sea
where the inanimate
is at work
and the sea flares toward the unleavened white
of the human flock that apes the dry heat of the seagulls and the herd.
Cows
wheat-coloured
in the melancholy sun—an untamed field
of sweet sweet milk.
Beaches hatched from centuries of mourning, out of kilter
on an earth
left incomplete by the vacant chime of sun and full of lowing.
It can only be holy because on the island all is empty
earth without sight
without the glow of animals
and in the orb of dawn the sad axe
of the wrist
hisses down to the bone of the tree. A cross
of silence bursts out
into the sacred chorus
—into the gleanings
of extinct herbs that taste of crater ash.
traduzione di Barry Callaghan

The wind – squamose at the core assaults us
bones of the hillside body bristling
after the harvest;
splice & dice of placid verdigris, a lament, the fragrant
cutlery of underground
springs, stalwart stillness of coppery water, the heat’s
victim
declares its conditioning love by riddling us.

The volatile host of automotive flesh and iron
is a nursery for concealed recurrence
water lifted off terraces and wheat fields
submerged
sanctuaries
drunk on wind and the solstice
glory
thundering and bare
observatory all algid and euphoric.

I DID NOT GO IN THE WATER WITH DIFFICULTY
The indifference of the mimosas similar to a project of the swallows and sea
in the mullioned window of the under port – the steel
of the containers at the beginning of the aerial bridge
on bodies as the arch of the new moon. I felt
alone
at the most a man, so I wanted your body without resistance
as the bread broken by Christ.
The milestone experience of the pines
– the drills, the brooms at the base of the trellis
isolated in the glass
and covered by lime.
The countryside that touches the sky and the sea as an infinite
gratitude
as your steps before the sin.
Inhale the air and the fading particles,
for all eternity with explosion of light
ammoniacal:
the toxic mold
of Tuthankamon, the egg shape of the skull filled with not resin,
golden rings on the knees where the bone begins
to react to the dorsal bend without ever resisting.
His voice was calm and truthful,
a love shed
the hemorrhagic reaction of a human material.
The bones show sign of healing now
they appear
sick with gratitude.
traduzione di Rebecca Lundin
Southern Italian Legend
The apparent, fleeting calm of birds
on the weary calm of the lake;
all our unfinished work
among strangers who pay for our pain.
The tired persistence of flies
in flight as the steppes grow in
our arms: bleached companion, meanness of nature. Sister,
imagine
things left behind by those who did not believe
in staying anywhere else: lands touched by eyes that did not
recognize them, pieces of cloth without the body
from which they were cut.
The incalculable trust of the summer lay shards of light
on the bitterness of their faces:
a silent self-denial of flames.
Imagine the pagan remorse of the sea
in the folds of their bodies.
0 commenti