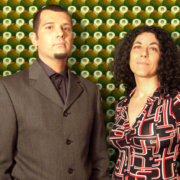 The Tyrrhenian is a cage of salt
an ailing corpse
to be mimicked
in the impassive sleep of an animal.

The contortion of the rocks
broken loins of enormous phenomena passing
along the coastal ribs
animals laid out for calm weather.

The saints stood like cormorants
—their beaks bound
to the articulations of the sea
they serve as bellwethers for caravans.

The watershed of summer savory
the recumbent aviary of the maestral—with their tufts
of wings withered one by one, verging on a forest of saline derivation.

The Aeolian peace of the cliffs, vast
battle horns
above the clay flats still as sanctuaries
and mines of salt silver
merchant ships in the bunker of tillage.

A vast winding sheet over the bass drum of the sea
where the inanimate
is at work
and the sea flares toward the unleavened white
of the human flock that apes the dry heat of the seagulls and the herd.

Beaches hatched from centuries of mourning, out of kilter
on an earth
left incomplete by the vacant chime of sun and full of lowing.

It can only be holy because on the island all is empty
earth without sight
without the glow of animals
and in the orb of dawn the sad axe
of the wrist
hisses down to the bone of the tree. A cross
of silence bursts out
into the sacred chorus
—into the gleanings
of extinct herbs that taste of crater ash.

Seeing how he played with the ball and watching the skeletal fluctuation of his
soul in the form of a shadow surrounding its arcs—the red orbits, the belltowers
of the ball over the vast
catalogue of the earth—the girl said to him but then you’re just
like me!: kneeling, simple, struck to the heart—the way the earth
overflown by darting spheres
reveals your structure as an elevated animal.
But I think that you’ll come back
on two legs—because you moved forward (with a bag
that was light, almost empty) constantly towards a domestic
scale. I
am at peace, given
the light I bend your silence to.
Face-to-face with your silence
I remember, I am consumed by brotherhood.
You now are body that I do not see but which
must have been. It is as beautiful as love contemplating
its own account of violence and peace, to know after it’s over
that you built the visible and invisible together
like a tower with a tower at the top, the entire factory of the world

She was easy to love but she was destined
to disappear in haste and yet to make
certain provisions that clues reveal to have been
meticulous. In the afternoon she would tend the garden
silently. We didn’t get what she was thinking, she was
so serene. Or else
she would be busy with a notepad. Every night—once the last client
got his clothes back on—she’d buy some pastry for her mother’s breakfast.

Debris floats through the water and is caught
at regular intervals by the grating buried
in the darkness and the silence that form many yards below
the superficially aerial appearance of the water
caused by the sun’s dawdling at the summit like a democratic
lacquer, an overflowing gush of optimism
even in the nettlefields deboned by the brunt of the factories.
It is called the hemp mill road and leads
in a mixture of mud and clods
that keeps the animal chaff from sinking in, to the hydroelectric
plant—it is an interrupted sentiment, a drift of continents and their submerged catastrophes
in the island of the body that ends up
at the door of the housing project: there’s just one guard who is watching
the to and fro between the two sides of water and serpentine flame or perhaps transmigration.

We find her in a strange state of abandon
as if all her ligaments were cut:
almost none of the canal water
no evil thoughts
no irony
not a drop of water in her lungs, not even
diatomic—her body buoyed up by a critical light
beyond its own abandonment—was pulsing in the sun as if in ecstasy.

The shoes were never found.
But the light beat coitally on the body of the girl
crystallized into evidence.
Between her eyes and womb
traces of the washhouse—working backwards to establish alibis.
The door turned out to be shut and double-locked.

She was burning like a host in the lacrimal
matter of the late afternoon—head caught among the bushes
and the obstinate repeated twists. Due to unknown causes
she did not make it to her birthday
whatever function her years would have had individually but an immobile
farewell to the beauty of the world
warmed the fiber that endures
joyous cry of the body free from pain.

On the home front they unroll the dispatches under mining lamps
and the unknown travels through the country like barbed wire that hears
the beating of the soldiers’ shovels, the enamel
of the mess kits against the tin
and yards of garlic. Maria, in our heads
there is such a shambles
the filth of beasts scrambling
underground, in our backs there is the buckling of mules
under the plebeian weight of the supplies. Give me your heart
Maria, so that your heart
weighs like earth in my hands
as I reach your side in danger. Maria, with your thoughts
that never stop thinking of me, even afterwards
hold me close, in my place
on the earth of names. Only you
know my name, Maria, because my name is at the rim
of your throat, white
as a drowned man in the canal
buried in your whiteness, resurfacing. Even afterwards,
tonight, when I am cinders, utter me Maria with your body.

I dream of them, they call me, I see them
smiling and saying come on
Maria, come and get us, I hear
all this rustling of children and feel the stab of
knowing they aren’t in the house, I see them in the house like ropes of fire with the fillings
of the dead
in the coagulations of blood
or they caress my lashes
wordless, for lack of themselves as language.

The crushing sweetness of the shoulder blades, the halted percussion
of the muscular harness, the valves
that have finally abandoned her
on the earth, the humble angle her head makes
to hide the smile
on the crude column of her body
says: I’ve been waiting for you all my life
I saw your life
in my dreams and all of it, night
after night, was smoothed out into forgiveness. At certain points
when the skyful of wonder overlapped
with the bubble of trees shaken by the full
moon, I would wake up
because of your dreams
and would carry your name like a flag
that rose up from my chest and made me
invisible: all of me
that one could see was your name. I knew
that at the close we would be close
whatever else happened to us in the meantime. Now
here I am, I am here to end
in your ending, to breathe in your last breath
from your mouth
and blow it through my mouth
that no one has ever kissed again since you,
to the sky.

As if in ritual binding
these crosses of wheat
unripened
on the body that is also green, incorruptible
inkwell
forged from a metal we dip into
for names, for praises
and is mere matter that we learn to use as song: ecce
corpus
meus
in absentia
carnal
exploited in this highest of domains
until it let out droplets
of death and of rebirth
– quia ad omne supplicium paratum
est, always in ecstasy – raptus
semper, Our Lady
of Loss, because the song of the dead accumulates
and is a new task—wild
flower and rose
of the everyday.

For the white soul that holds us up and the romantic roses
for what slowly decays
and breaks off its apparent sleep
among the green handfuls of sun
for this angel with golden heels
that takes on the flavour
of the reservoirs
—of the mills
and of the woodsheds
in the smoke that rises from the excavated earth
as it feels discontent arrive
and endures the same
mysterious smile
of fruitbearing plants
for the firewood that carries contagion
through the rows
divert us from the fact of death:
the body is nothing
thinking of the infinite,
apple tree in the sun
pouring itself out on the heart of the earth
moving free
with the oxide of branches,
the rust
and the sturdy matter
of insects with glowing immortal bodies.

At its maximum point of expansion the trunk
sings like a harmonium
the ducts contract inside
to modulate the song of the species. Turn upside down
in the water to touch the ground and bob
up again two or three times to the surface making
amphibian movements, taking on
the arctic, mercurial colour of amphibians—the pose
of zero, of lack
of interest: only
thus will you pass with your whole body
from realm to realm.
From the shore, among the brown agaves
they will believe in an occupation
of sun in the veins before the eyes of all—
the brotherhood will make them smile.

The air, the first air
you breathed, was the air of March and morning. The sun
burned calmly in its wave
from the window that was wide because wide was
the heart
and disinterested
as the sun that sets its light down on the river water
and sails clear
to the sea
where the space is all riddled
by seagull whistles and nothing
hurts any more. It is beautiful to hold
the new air on the face of the newborn, with hands
that are human hold
sacred the sacred, make the air clearer where it touches
the heart, so that the heart is simple and weightless
as a kite
and other things that move from earth to sky.
It is beautiful to say I will do what I can
and more than myself, like all the other women on the earth: take, life
from my life
your innocent freedom.